Recommendation from embassy of India in Paris and the indian government

You are aware that the COVID-19 has emerged as a global public health challenge. You might also have seen reports in the media regarding the situation of COVID-19 in India. Our Health Minister has also given a report on it in the Parliament yesterday. The current situation and the steps taken by Government of India in this regard are provided below:

2. As per the latest update, 31 persons with COVID-19 infection have been reported in India. Out of this 16 persons are of Italian nationality. Three others who were found infected in Kerala have recovered and been discharged. All the fresh cases of infections are under treatment and are stable.

3. Screening at all airports, seaports and land crossings has started. Universal screening of all passengers has been initiated. Till date, nearly 600,000 passengers have been screened at the airports and over 16,000 at seaports. Passengers coming by airlines are being further monitored in community surveillance through Integrated Disease Surveillance Programme (IDSP) network on a daily basis. Till date nearly 29,000 passengers have been brought under community surveillance. Out of these, 14,000 were found to be symptomatic and 70 of them have been hospitalised.

5. High-Level Coordination Meetings are organised almost on a daily basis to make the risk assessment based on global, national and sub-national situational awareness. Inter-sectoral coordination at all levels is being emphasized and working on the principles of adherence to core capacities for disease preparedness and response: surveillance, laboratory diagnosis, hospital preparedness, logistic management, capacity building and risk communication.

6. A step-wise strategic approach to face the emerging situation in the fight to contain COVID-19 is adopted. Containment surveillance at Points of Entry has been strengthened. With the initial few cases, steps have been initiated to take care of local community transmission by the first carriers who have managed to come into the country. In such cases, cluster containment strategies have been laid out which include listing of contacts, deciding on the containment zone, perimeter control (exit and entry) and focused actions in the containment zone for isolation of cases, home quarantine of contacts, social distancing measures and communicating the risk to the public. Detailed strategies have been put in place in case of larger outbreak with widespread community transmission.

7. Details of Cluster Containment Strategy are as below:

To contain the disease within a defined geographic area by early detection, breaking the chain of transmission and thus preventing its spread to new areas.

· Clusters of human cases are formed when there is local transmission.

· There could be single or multiple foci of local transmission.

· There may or may not be an epidemiological link to a travel related case.

· The risk assessment would be carried out at the site by the State/Central rapid response teams (RRTs).

· RRT shall map the cases and contacts and determine the extent of spread and decide on containment zone and buffer zones and the scale of arrangements that needs to be put in place.

· Special Teams have to be formed for field surveys, visiting households besides taking action for sample collection, shifting to tertiary hospitals, including creating required community orientation.

8. Various travel advisories have been issued. All these steps have been kept to the minimum and absolutely necessary. As our Prime Minister has mentioned in his latest tweet, ‘there is no need to panic’. The number of cases detected so far have been at early stages and is testimony to the efficacy of the stringent protocols and systems in place. The numbers also have to be seen in the context of the size of the country.

9. we are also monitoring the situation in France and taking appropriate precautions as per the regular advisories issued by French government. 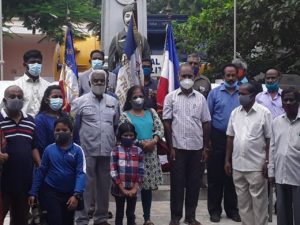